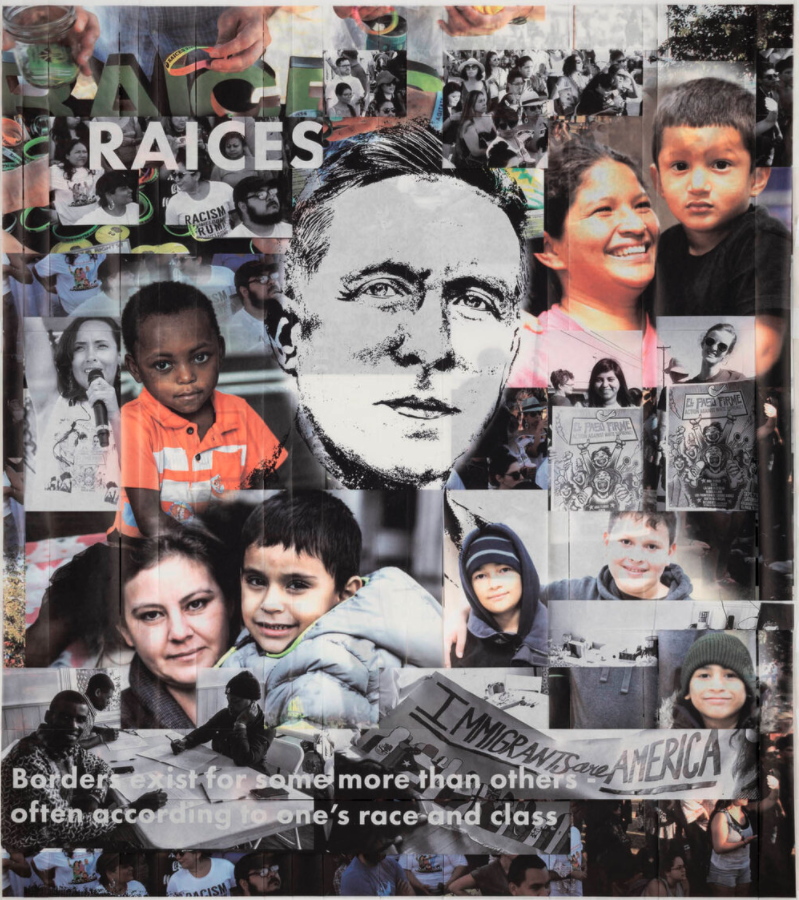 Watch Learn More
The work of RAICES was featured by the artist Taiji Terasaki in his contemporary art exhibition, at the Japanese American National Museum (JANM) in Los Angeles, CA from January through March 2020. Through video projections on mist, photographic weavings, and audience participation, visitors to this multimedia exhibition were invited to learn about, reflect on, and celebrate heroes who advocate and fight for those who face discrimination, prejudice, and inequality at borders both real and imagined. The show also served as a remembrance of the 78th anniversary of President Roosevelt’s signing of the Executive Order 9066, which authorized the unconstitutional incarceration of American citizens and residents, and draws parallels between the Japanese American concentration camps in World War II and today’s detention crisis. In conjunction with the exhibition, former RAICES Communications Manager Lucia Allain represented the work of our RAICES heroes with a special Pecha Kucha presentation and human rights panel delivered at JANM’s National Center for the Preservation of Democracy as part of the one-day celebration of the Transcendient heroes and their work.

Video of the Exhibition Opening at JANM.

“As an institution born of a community’s unjust World War II-era incarceration and the aftermath, JANM has long focused its attention on the consequences of prejudice, fear, and misuses of power. TRANSCENDIENTS shines a light on both celebrated and unknown ‘heroes in our midst’ who have dedicated their work to dismantling borders, speaking truth to power, and promoting reconciliation and understanding. JANM and Terasaki honor and celebrate diverse and all encompassing heroes, whose work ranges from advocating for the humane and just treatment of refugees and immigrants, to those who challenge power through interfaith social justice, to those who believe in the potential of former gang members to transform into leaders in their communities. TRANSCENDIENTS invites visitors to be challenged and inspired by these heroes, make connections between past and present, and contribute in their own ways to support a more just, fair, and compassionate society.”
– Emily Anderson, PhD, Curator at JANM
Taiji Terasaki
TaijiTerasaki.com
Taiji Terasaki is a Japanese-American artist based in Honolulu, Hawaii. Growing up in a family of scientists and creatives, with a formal arts education, Terasaki has spent more than 30 years exploring avant-garde innovations in his craft, working in photography, sculpture, immersive and large-scale installations, and pioneering mediums like mist projections as canvas. His cutting-edge presentations are often juxtaposed by the subjects of cultural and environmental conservation, preservation, and restoration. Terasaki made his public debut in 2017 with REBIRTH at Honolulu’s Ward Center, and Edible Landscapes for the Trillenium in conjunction with “Contact 3017: Hawaiʻi in 1,000 Years” at Honolulu Museum of Art. That same year, his first solo exhibition, Feeding the Immortals, premiered at the Ravizza Brownfield Gallery. Stemming from Terasaki’s search for ritual and meaning in death following the passing of his father, the exhibit was comprised of mixed media works with ceramic, photography, vapor projections, video, and ceremonial performance—all honoring and paying tribute to those beloved who have passed on. Since then, Terasaki has invested his considerable energy into large-scale and civic art projects. He had shown in Hawaiʻi, throughout the continental US, and internationally–most notably at the Curitiba Biennial in 2017. Terasaki’s most recent project, TRANSCENDIENTS: Immigrant Stories of Place, poetically holds space for the immigrant populations that comprise America, celebrating their contributions through technology-based storytelling, contemporary portraiture, and immersive experiences. Terasaki studied in the MFA programs at both Hunter College in New York and Cal State Long Beach, and holds a BFA from UC Irvine. He currently resides in Honolulu with his wife and two children.