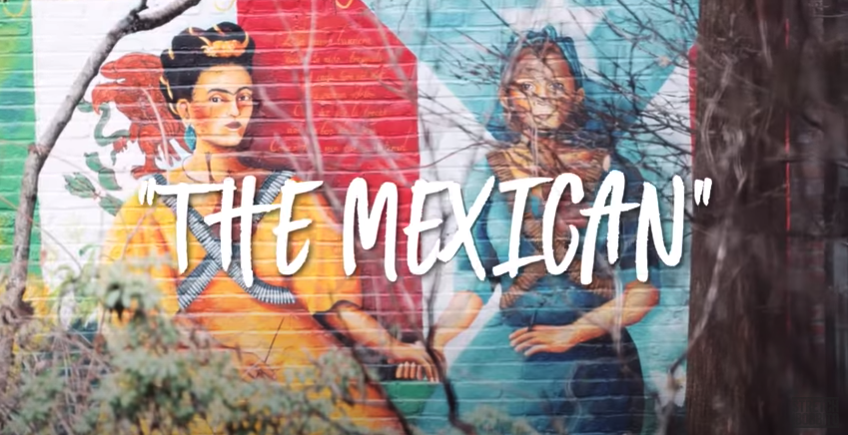 Watch Learn More
“The Mexican” was originally performed by an obscure UK folk rock band called Babe Ruth. The original lyrics were written in protest of the film The Alamo starring John Wayne and its historical inaccuracies about the Mexican American War. Since the song has such a deep history for both Mexicans as well as the original hip-hop community, Stretch + Bobbito updated the lyrics for their rendition to address today’s crisis at the US Southern border.

The original Babe Ruth song was also anthemic to the burgeoning hip hop movement of the ’70s, which was dominated on the dance floor by mostly Puerto Ricans who were Rockers and/or B-boys/B-girls. To pay homage, Stretch + Bobbito had some of the world’s top dancers of the culture perform on camera. Additionally, when recording their rendition, they added plena drums (Afro-Boricua roots music) and worked with plena dancers in the video as well. To bring these words to life, they used b-roll from the upcoming National Geographic documentary titled Blood on the Wall directed by Nick Quested. The music video was released on January 17, 2020 alongside a debut concert at The Kennedy Center celebrating the release of their debut album No Requests.

“Overall goal was to represent the diversity of the communities this classic song has impacted, thus creating bridges, instead of walls.”
– Bobbito Garcia a.k.a. Kool Bob Love
Adrian “Stretch” Bartos
stretchandbobbito.com
Adrian Bartos, or “Stretch Armstrong,” is an internationally recognized DJ, cultural pioneer, and the co-host of NPR’s podcast What’s Good with Stretch and Bobbito. In the show, Stretch and Bobbito interview cultural influencers, bringing their warmth, humor, and a fresh perspective. In the 1990s, radio duo Stretch and Bobbito were pivotal figures in the evolution of hip-hop as a worldwide cultural phenomenon. As a club DJ, Stretch was the progenitor of “open-format” (mastering a multitude of musical genres) and has spun all over the world for over two decades. He is considered to be part of an elite group of master DJs, capable of playing to intimate crowds as well as large rooms, with an expertise in a wide variety of genres spanning several decades, from classic to contemporary. Over the past decade, Stretch has taken his expertise into music supervision as a consultant for brands seeking to further their musical identity. Most recently, he was the music consultant for HBO’s Vinyl. Stretch’s own story, along with radio partner Bobbito Garcia, has been made into a film, produced by the duo (music-supervised by Stretch and directed by Garcia) titled STRETCH AND BOBBTO: RADIO THAT CHANGED LIVES, which has screened in over forty cities internationally. The film made its network U.S. television premiere on SHOWTIME. As an author, Stretch has written extensively for cuepoint.com. His first book, a visual and oral history of New York City nightclub flyer art, titled No Sleep: NYC Club Flyer Art, 1988-1999, was released through Powerhouse Books.
Bobbito García
koolboblove.com
NYC native Bobbito García is a freelance creative who has put an indelible footprint on multiple urban movements. During the 1990s, the legendary air personality was one-half of the “Stretch and Bobbito” program on WKCR. The duo introduced the world to an unsigned Nas, Biggie, and Wu-Tang, as well as an unknown Jay-Z, Eminem, and the Fugees. The total record sales for all the artists that premiered on their platform exceed 300 million. In 1998, the Source Magazine voted them as “The Best Hip Hop Radio Show of All Time.” As the progenitor of sneaker journalism, García penned his landmark Source article “Confessions of a Sneaker Addict” in 1990, then in 2003 became the critically acclaimed author of Where’d You Get Those? NYC’s Sneaker Culture: 1960-1987 (Testify Books). In 2005, ESPN’s “It’s The Shoes” series, hosted by Bobbito, became the first show on the subject in broadcasting history. A former professional basketball player in Puerto Rico, García performed in the ground breaking Nike “Freestyle” commercial. In 2007, the brand released seven co-designed Air Force 1 sneakers bearing his name. The voice of EA Sports’ popular NBA Street video game is also a world-renowned DJ, who has spun World, Soul and Jazz music at Lincoln Center, Central Park SummerStage, and the Smithsonian (DC). As an award-winning filmmaker, García has directed Doin’ It In The Park: Pick-Up Basketball, NYC (PBS, Netflix), Stretch and Bobbito: Radio That Changed Lives (Showtime, Netflix), and NY Times “Critics’ Pick” Rock Rubber 45s (Smithsonian African American Film Festival 2018 official selection). A founding member of the Kennedy Center’s Hip Hop Culture Council and a recent Wesleyan University “Distinguished Alumni Award” recipient, “Kool Bob Love” currently produces his b-ball tournament Full Court 21™ in four continents, and released the debut Stretch & Bobbito + The M19s Band album titled NO REQUESTS on 10x Grammy Award winner Eddie Palmieri’s Uprising Music label.
The M19s Band
uprisingmusicnyc.com
Drums by Camilo Molina / Percussion by Orlando Vega / Bass by Luques Curtis / Keys by Axel Tosca / Trombone by Corey Wallace / Trumpet by Jonathan Powell / Flute & Sax by Gabrielle Garo / Guitar by Bryan Vargas / Vocals by Edson Sean / Nekaybaw / ArinMaya Featuring appearances by: Rich Medina / Maimouna Youssef / Mireya Ramos (vocals & violin) / Jose Parlá
Mireya Ramos
mariachinyc.com
Mireya Ramos, cofounder of Flor de Toloache, is a violinist, vocalist, composer, and arranger of Dominican and Mexican descent raised in San Juan, Puerto Rico. She embodies all of her musical influences whether mariachi, salsa, merengue or hip-hop, she always creates a unique and refreshing sound. Although classically trained through the Suzuki method and orchestral experiences in college, her passion lies in folklore and other alternative genres. Her natural improvisational skills and beautiful tone both in her violin and her lyrical voice has made her one of the top Latin artists in New York City.