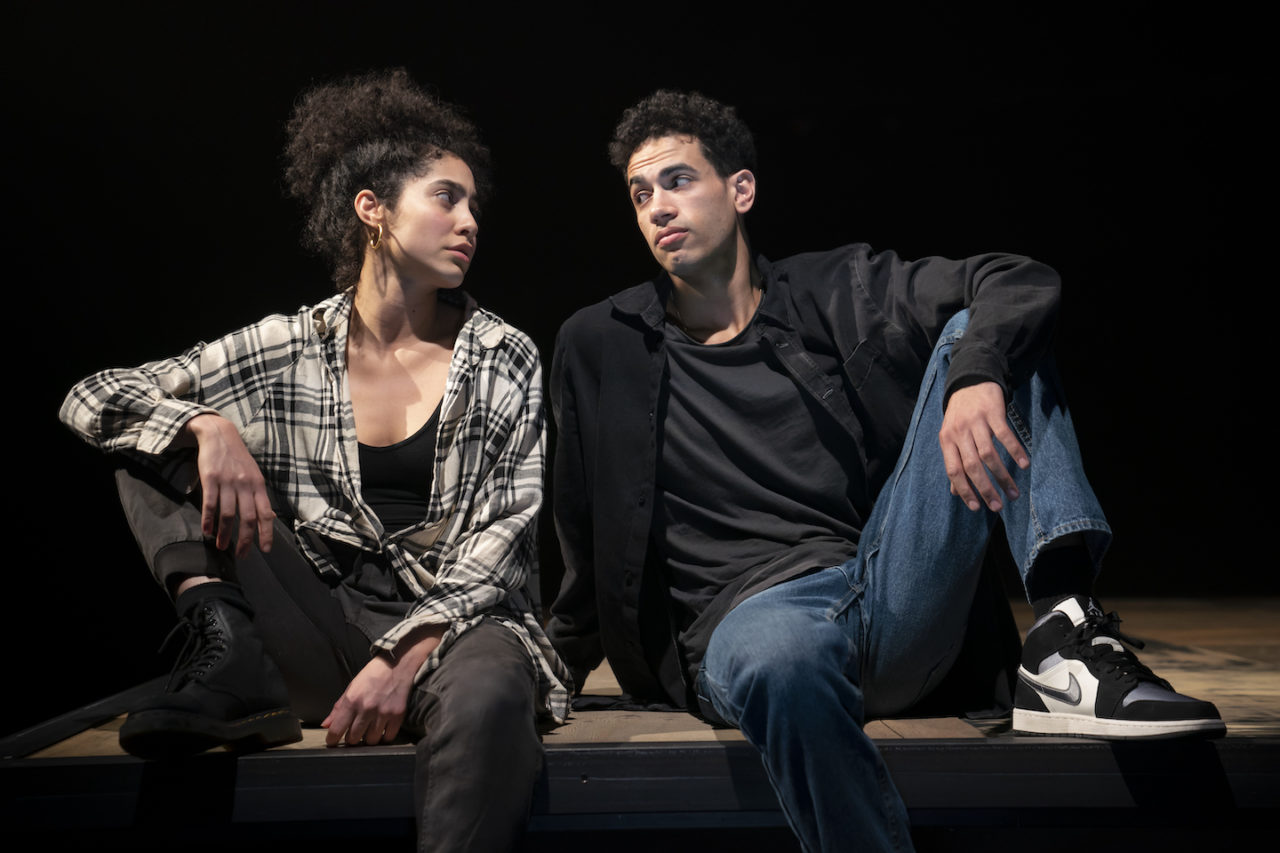 Watch Learn More
In partnership with New York Theatre Workshop (NYTW), RAICES offered our community complimentary access to stream Sanctuary City, a new play by Pulitzer Prize-winning playwright Martyna Majok that centers on the story of DREAMers, lovers, and life-long friends who negotiate the promise of safety and the weight of responsibility while fighting to establish a place for themselves and each other in America.

Faisal Al-Juburi
RAICES Associate Vice President, Philanthropy
Faisal Al-Juburi has served the not-for-profit sector for 15 years, strategically positioning institutional ventures for dynamic public and private partnerships that facilitate lasting social impact. His credits prior to leading the philanthropy team at RAICES include repositioning the intercultural relations not-for-profit Bridges of Understanding and negotiating its merger into Soliya, a pioneer in transnational Virtual Exchange education; heading the public health and environmental initiative MillionTreesNYC, launched by Bette Midler and Michael R. Bloomberg during his tenure as mayor; serving as a corporate relations specialist at the Kennedy Center, where he advised on “Arabesque: Arts of the Arab World” and leveraged special events for expansive sponsorships and integrated marketing deals; and working with ExxonMobil at Ford’s Theatre to lay the foundation for “The Abraham Lincoln Bicentennial Campaign,” a $60 million effort that reinvented the historic site as an education and leadership campus. Standing at the intersection of art and administration, Faisal has also executive produced myriad experiential tributes in honor of trailblazing global citizens and creative-directed the 70th anniversary celebration of Rodgers & Hammerstein’s South Pacific, featuring Grammy Award-winning opera star Isabel Leonard and Pulitzer Prize-winning migrant justice activist Jose Antonio Vargas. He earned an MS in Communication from New York University (NYU) and a BA in History from the University of Virginia (UVA). A first generation Iraqi American, Faisal currently resides in Manhattan, where he leads the Board of Directors for Rosie’s Theater Kids alongside the organization’s namesake Rosie’ O’Donnell.

Marisol Conde-Hernandez
Associate Attorney at Law Office of Eric M. Mark
Marisol Conde-Hernandez, Esq. is an Attorney at the Law Office of Eric M. Mark, a small firm focusing on all non-business immigration, criminal defense in New Jersey, and “crimmigration”- the intersection of immigration and criminal law. Her immigration work includes a wide range of affirmative applications, removal defense, and both state and federal appellate filings. She is a graduate of Rutgers Law School- Newark, Rutgers University, and Middlesex County College. She is licensed to practice in the State of New Jersey, the U.S. District Court for the District of New Jersey, and the U.S. Court of Appeals for the Second Circuit. She currently serves as Secretary of the New Jersey State Bar Association’s Immigration Law Section; Co-Chair of the Law Student and New Member Committee of AILA-NJ; and serves on the Board of the Trustees for Young Audiencies New Jersey & Eastern Pennsylvania. Finally, Marisol was the first undocumented graduate of a New Jersey law school, and she was only the second undocumented person to become an attorney in the State of New Jersey.

Anju Gupta
Rutgers Law School Vice Dean; Professor of Law & Judge Chester J. Straub Scholar; and Director, Immigrant Rights Clinic
Anju Gupta received her B.A. with high honors in psychology and women’s studies from the University of Michigan—Ann Arbor and her J.D. from Yale Law School, where she was an Equal Justice America Fellow, Director of the Temporary Restraining Order Project Domestic Violence Clinic, Director of the Rebellious Lawyering Conference, and an editorial board member of the Yale Journal of Law and Feminism. She also worked at the ACLU Immigrant Rights Project and the National Coalition Against Domestic Violence. Anju Gupta clerked for the Honorable Chester J. Straub of the United States Court of Appeals for the Second Circuit and the Honorable Charles P. Sifton of the United States District Court for the Eastern District of New York.

Prior to joining the Rutgers faculty, Professor Gupta served as Assistant Professor of Law and Director of the Immigrant Rights Clinic at the University of Baltimore School of Law, where she supervised students representing immigrants seeking various forms of relief before the Department of Homeland Security, the immigration courts, the Board of Immigration Appeals, and the federal courts of appeals. She also served as a Clinical Teaching Fellow in the Center for Applied Legal Studies at Georgetown Law, where she supervised students representing asylum seekers.

She began her law teaching career as a Clinical Fellow at the Center for Social Justice at Seton Hall University School of Law, where she supervised students and represented clients in cases involving asylum, human trafficking, domestic violence, immigrant labor rights, and criminal immigration issues. She also authored an amicus brief to the United States Supreme Court and traveled to Haiti as part of the Haiti Rule of Law Project.

At Rutgers, she serves as the Director of the Immigrant Rights Clinic in Newark. In the clinic, she supervises students representing immigrants seeking various forms of relief before immigration courts, the Department of Homeland Security, the Board of Immigration Appeals, and the federal courts of appeals.

She also teaches non-clinical courses in refugee law and professional responsibility. She serves on the national board of the Clinical Legal Education Association, and has spoken at or organized numerous regional and national conferences in immigration law and clinical education. Professor Gupta’s scholarship focuses on immigration and refugee law, with a particular focus on gender-based claims for relief.

Tim Raphael
Rutgers University Professor of Arts, Culture and Media; Director, Center for Migration and the Global City; Co-Director, Newest Americans; Core Faculty, Global Urban Studies Doctoral Program; Associated Faculty, American Studies Doctoral Program
Tim Raphael is a Professor in the Department of Arts Culture and Media at Rutgers University-Newark and Director of the Center for Migration and the Global City and the Newest Americans project. He has devised, directed and produced over fifty theatrical productions at theaters in New York, Chicago, Los Angeles and Washington, DC. Dr. Raphael has also written extensively about the intersection of politics, popular culture and performance for a variety of journals, and in the book The President Electric: Ronald Reagan and the Politics of Performance. He holds a doctorate in Performance Studies from Northwestern University and has taught Theater, Performance Studies, and American Studies at Dartmouth College, Wesleyan University, Georgetown University, and the Universidade Aberta in Lisbon, Portugal. He has won awards for his teaching including The Rutgers Presidential Fellowship for Teaching Excellence.

A Theatre of the Oppressed (TO) practitioner who studied and worked with Augusto Boal, Alex has facilitated many workshops throughout his career, particularly with youth, educators and immigrant communities. He is Past-President of the Board of Directors of Pedagogy and Theatre of the Oppressed, Inc., a national organization devoted to the work of liberatory educators, activists, artists, and community organizers, and a current board member for the NYC Arts in Education Roundtable, a service organization for arts education practitioners.

Alex has presented his work at numerous conferences and his writing has appeared in The Indypendent, TYA Today, The Cross Border Project Blog (Spain), the anthology “Come Closer”: Critical Perspectives on Theatre of the Oppressed, The Routledge Companion to Theatre of the Oppressed and Applied Theatre with Youth: Education, Engagement, Activism. He has taught Latin American and Latinx Theatre at Drew University and currently teaches TO for the Department of Drama at NYU’s Tisch School of the Arts and the Educational Theatre program at NYU’s Steinhardt School of Culture, Education, and Human Development.

He holds a BS in Urban and Regional Studies from Cornell University and an MA in Educational Theatre from NYU Steinhardt.

FEATURING
Martyna Majok
martynamajok.com
Martyna Majok was born in Bytom, Poland and raised in Jersey and Chicago. She was awarded the 2018 Pulitzer Prize for Drama for her play, Cost of Living. Other plays include Sanctuary City, Queens, and Ironbound, which have been produced across American and international stages.

Martyna is currently writing a musical adaptation of The Great Gatsby, with music by Florence Welch and Thomas Bartlett, and developing an original series for HBO based on her play, Queens. She lives in New York City.