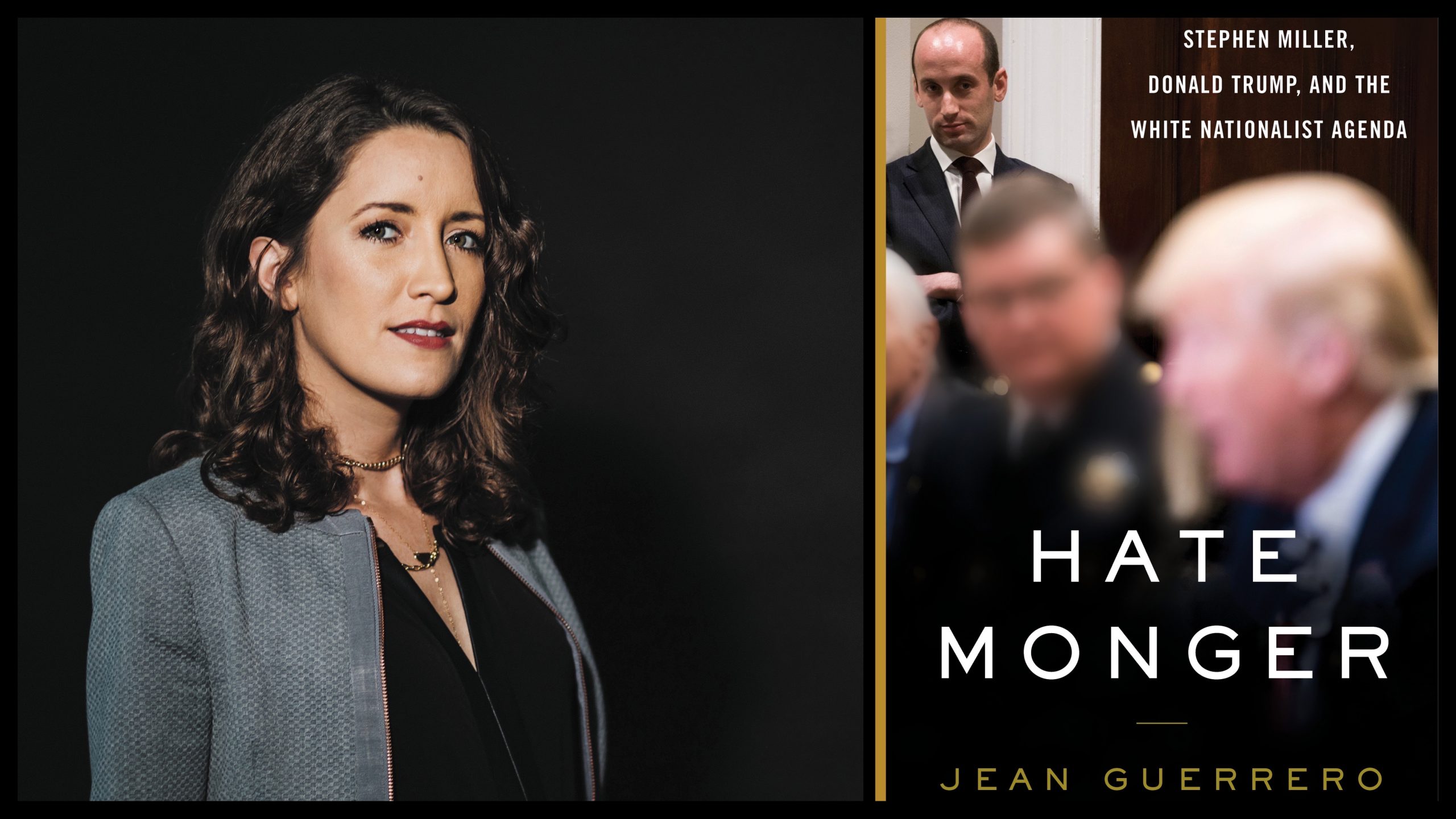 RAICES leads conversation with author Jean Guerrero on the radicalization of Stephen Miller, one of Trump's most influential advisors

Watch
RAICES led a conversation with author Jean Guerrero, one of the first Latina journalists to publish an investigative book about the Trump administration titled, Hatemonger: Stephen Miller, Donald Trump, and the White Nationalist Agenda.

Learn about the radicalization of Stephen Miller, one of the most influential advisors in the Trump White House driving its white nationalist agenda and anti-immigrant policies, who designed immigration policies that ban Muslims and separate families.

Jean Guerrero, Author
Jean Guerrero is an investigative border reporter contributing to NPR, the PBS NewsHour and other public media. She is the author of Crux: A Cross-Border Memoir, which won the PEN/FUSION Emerging Writers prize. She is also the recipient of an Emmy. She began her career at the Wall Street Journal and Dow Jones Newswires as a correspondent in Mexico City. Her writing is featured in Best American Essays 2019, edited by Rebecca Solnit. Guerrero lives in La Mesa, California. Learn more at jeanguerrero.com or follow Jean on social media:
Twitter: @jeanguerre
Instagram: @jeanguerre
Facebook: iamjeanguerrero

Jonathan Ryan, former CEO / President
Jonathan Ryan served as the Executive Director of the Refugee and Immigrant Center for Education and Legal Services (RAICES) from 2008-2021. RAICES provides free and low-cost legal services to underserved immigrant children, families and refugees in Central and South Texas. Previously, he worked as a staff attorney at American Gateways where he helped to establish the Legal Orientation Program for adults in DHS detention. Jonathan received his B.A. from Columbia College in New York and is a graduate of the University of Texas School of Law.

Stephen Miller is one of the most influential advisors in the White House. He has crafted Donald Trump’s speeches, designed immigration policies that ban Muslims and separate families, and outlasted such Trump stalwarts as Steve Bannon and Jeff Sessions. But he’s remained an enigma.

Until now. Emmy- and PEN-winning investigative journalist and author Jean Guerrero charts the thirty-four-year-old’s astonishing rise to power, drawing from more than one hundred interviews with his family, friends, adversaries and government officials.

Radicalized as a teenager, Miller relished provocation at his high school in liberal Santa Monica, California. He clashed with administrators and antagonized dark-skinned classmates with invectives against bilingualism and multiculturalism. At Duke University, he cloaked racist and classist ideas in the language of patriotism and heritage to get them airtime amid controversies. On Capitol Hill, he served Tea Party congresswoman Michele Bachmann and nativist Alabama Senator Jeff Sessions.

Recruited to Trump’s campaign, Miller met his idol. Having dreamed of Trump’s presidency before he even announced his decision to run, Miller became his senior policy advisor and speechwriter. Together, they stoked dystopian fears about the Democrats, “Deep State” and “American Carnage,” painting migrants and their supporters as an existential threat to America. Through backroom machinations and sheer force of will, Miller survived dozens of resignations and encouraged Trump’s harshest impulses, in conflict with the president’s own family. While Trump railed against illegal immigration, Miller crusaded against legal immigration. He targeted refugees, asylum seekers and their children, engineering an ethical crisis for a nation that once saw itself as the conscience of the world. Miller rallied support for this agenda, even as federal judges tried to stop it, by courting the white rage that found violent expression in tragedies from El Paso to Charlottesville.

Hatemonger unveils the man driving some of the most divisive confrontations over what it means to be American––and what America will become.