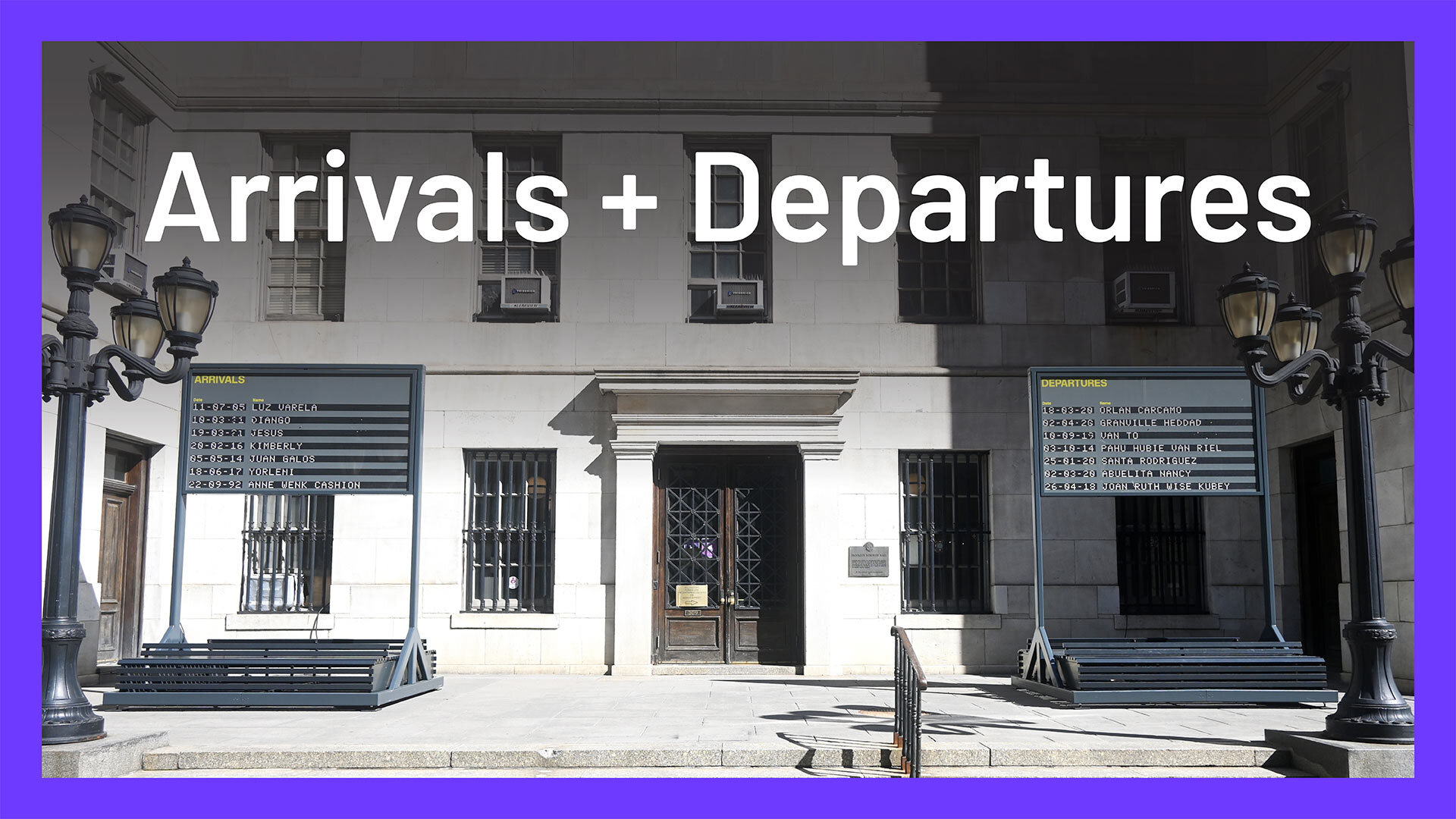 Arrivals + Departures and The Power of Naming

Watch Learn More
In collaboration with BAM (the Brooklyn Academy of Music) and at the invitation of social practice artist duo Yara El-Sherbini and Davina Drummond, RAICES took over the public and virtual art installation “Arrivals + Departures” on Tuesday, March 30, 2021 (photo courtesy of BAM Hamm Archives). The project is a large-scale public art installation that pays tribute to people — both those entering the world and leaving it. The work takes the recognizable form of a train station arrivals and departures board that displays names submitted by the public to celebrate a birth (arrivals), honor someone living, or commemorate a death (departures). The public installation is hosted in front of Brooklyn Borough Hall for a total of four weeks through April 11, 2021 with a virtual component online. Names can be submitted through this online portal from anywhere in the world. 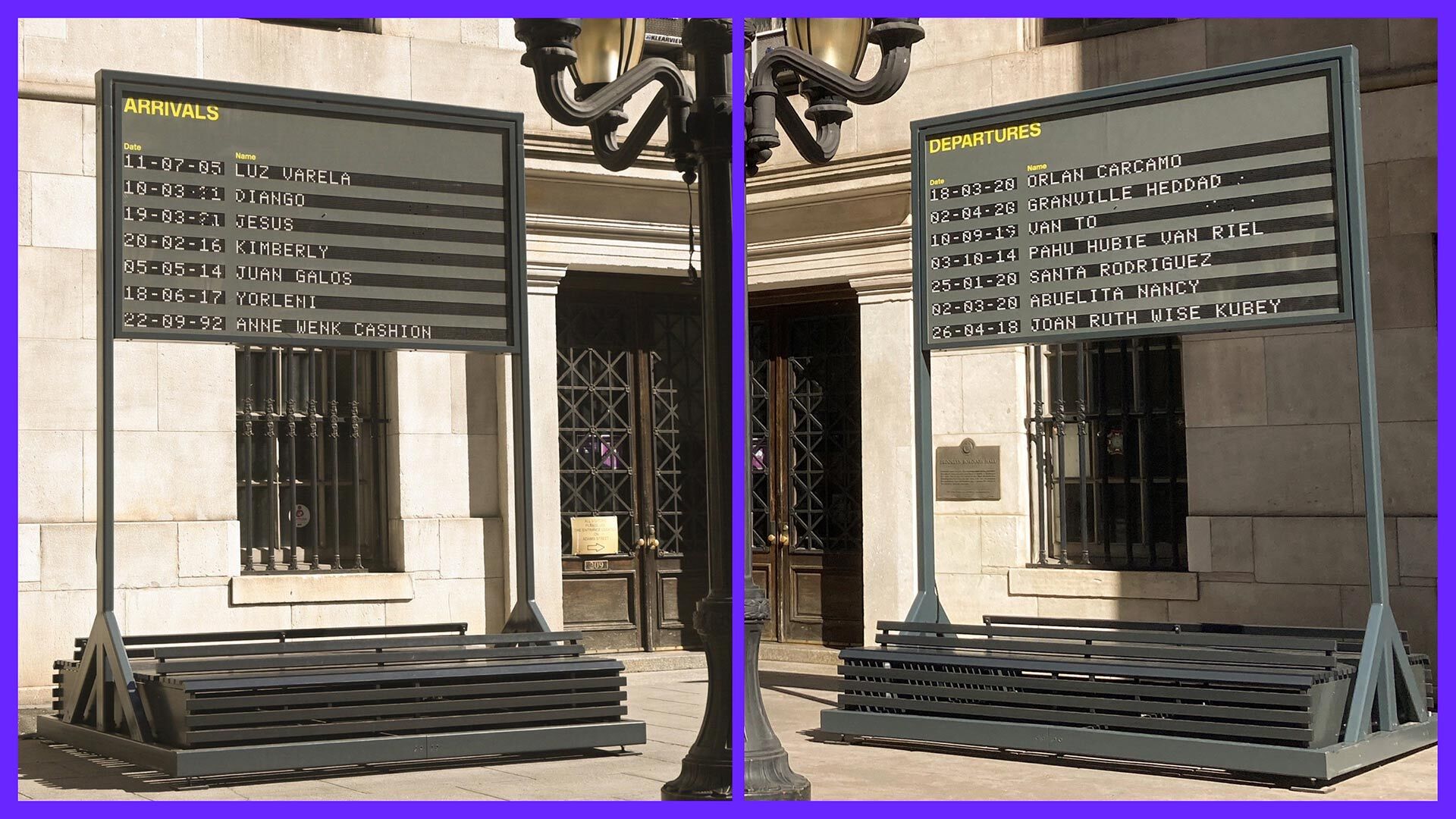 ARRIVALS + DEPARTURES TAKEOVER The arrivals and departures shared by RAICES illustrate how immigration policies and practices deeply impact individual lives. We work within an immigration system that is designed to deport immigrants, separate families, and imprison people in detention. It places immigrants in a constant state of arrival and departure. Our approach to the takeover is driven by consent. It is with deep care, concern, and deliberation that we are naming individuals with whom we have worked and whose legal journeys illustrate the many forms of arrival and departure.

ORLAN CARCAMO
Departed 18/03/2020
Karnes County Immigration Detention Facility in Karnes City, TX
27-year old Orlan Carcamo took his own life in his cell rather than remain in ICE detention with his 4-year-old son in south Texas. He escaped torture and harm in Honduras and fled to the United States seeking refuge, but he and his son only found pain and delay in ICE custody resulting in his tragic death.

LUZ VARELA
Arrived 11/07/2005
Nuevo Laredo, Mexico
Luz Varela knows what it is like to start in a new country from zero. She arrived in the United States at the age of 13 from Mexico, is a DACA recipient, and works with unaccompanied minors who are held at Health and Human Services shelters in her role as Legal Assistant for RAICES Children’s Program that provides children with information about their legal rights and pro bono legal representation.

DIANGO
Arrived 10/03/2021
Nebraska, USA
Diango, a village fisherman from Cuba, was placed under surveillance, harassed, and detained after being suspected of smuggling Cubans into Florida by Cuban authorities, who ultimately revoked his fishing license without permission to relocate, thereby depriving him of his ability to make a living. After being persecuted for his political opinion in Cuba, Diango arrived at the United States border to seek asylum on July 29, 2019 and was subject to the Migrant Protection Protocols (MPP), a policy that forced more than 71,000 asylum seekers to wait in dangerous conditions in Matamoros, Mexico while their claims were processed, before being released on parole 590 days later on March 10, 2021.

JESUS
Arrived 19/03/2021
Nebraska, USA
Jesus was harassed, beaten, and detained by Cuban authorities and forced to undergo weekly HIV testing by his community CDR leader because he is a gay man. The harassment only intensified after he expressed support of same-sex marriage yet refused to vote on a Constitutional referendum on the topic, deeming it a charade in a country that is not a real democracy. After continued persecution, Jesus arrived at the United States border on July 24, 2019 to seek asylum. Under the Migrant Protection Protocols (MPP) he was forced to wait in dangerous conditions in Matamoros, Mexico for his claim to be processed before being released on parole 604 days later on March 19, 2021.

JOSUE
Arrival
San Antonio, TX
Josue is a DACA recipient who arrived in the United States from Honduras as a child with his father. In September 2019, Josue lived the experience feared by many mixed-status families and witnessed his father‘s apprehension by ICE outside their San Antonio home just days before beginning his MFA in Chicago on scholarship. Fortunately, his father was freed from detention and could welcome him back home from school in December for the winter break holiday.

KIMBERLY
Arrived 20/02/2016
Miami, FL
Kimberly was born in El Salvador and arrived in the United States as an unaccompanied child at the age of 15. She reunited with her mother on February 20, 2016 and received her Lawful Permanent Resident status 1,683 days later on September 28, 2020: “February 20, 2016 was one of the best days of my life because it was the day that I was able to see my mom after many years without seeing her. It was such an overwhelming emotion that my most desired dream would come true that day. My goal in this country is to continue learning more English so that I can pursue a university degree and become someone in this life.”

JUAN GALOS
Arrived 05/05/2014
Hidalgo, TX
Juan Galos arrived in the United States on May 5, 2014 at the age of 14 after a long journey from Honduras with his aunt, cousin, and father. They hoped to reunite with his mother. Upon arrival they were arrested and detained in a “hielera” (icebox) by United States Customs and Border Protection, who eventually deported his father. Juan obtained his Lawful Permanent Resident status 2,409 days later on December 7, 2020 and today lives happily with his mother while pursuing a college degree: “The journey was long and I was very tired but excited at the same time because I was going to see my mother. I really missed her and longed to be with her. When CBP arrested us in Hidalgo, TX they sent us to the hielera. I was very worried because my dad was sent to a different place. He had all my mother’s information and I was very sad because I thought I would never see her again. My dad was deported but I got to see my mother again. I am very happy in the United States. I live with my mother. She has given me all her support. I am going to college and I am studying to become a physical therapist. I am grateful because I have been able to take full advantage of the many opportunities this country has to offer. I am also grateful because I live in peace and have made very good friends. I do not live in fear. I can’t imagine living somewhere else. My wish is to help others like me and help them succeed.”

YORLENI
Arrived 18/06/2017
Hidalgo, TX
Yorleni fled violence in Guatemala and arrived in the United States on June 18, 2017 as an unaccompanied child at the age of 17 with her baby girl. Three months later she reunified with her mother after spending 11 years apart. At their asylum merits hearing held 958 days after arrival, an immigration judge granted Yorleni and her daughter withholding of removal under the Convention Against Torture: “I feel happy and grateful to be here in the United States. I am working to give a better future to my daughter and give her all the opportunities that I did not have back in Guatemala… but most importantly I want her to be safe from violence and have a happy childhood.”


THE POWER OF NAMING PANEL CONVERSATION
As part of the “Arrivals + Departures” initiative, Jonathan Ryan joined artists Yara + Davina and Luba Cortés, Immigrant Defense Coordinator at Make the Road New York, for a conversation about “The Power of Naming,” hosted by BAM and moderated by Thomas Keenan, Director of Human Rights at Bard College: