Imagine being trapped behind bars and separated from your family for months simply because you did the right thing. For our client Jacob, that nightmare is his reality. 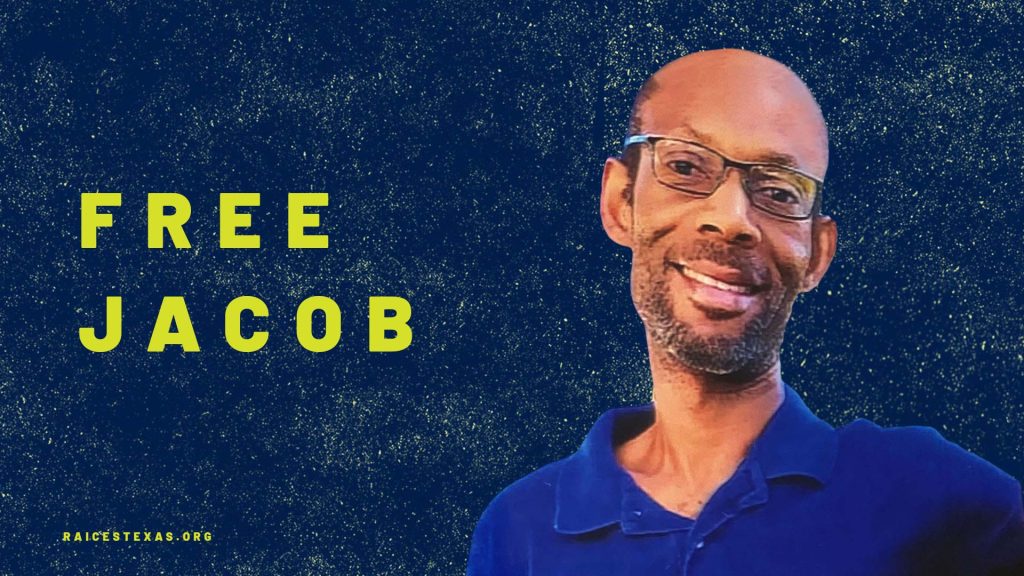 Jacob is a husband and father of 9- and 10-year-old children who was working as a police officer in the country he called home.1 When he spoke out about the brutal and punitive corruption that plagued his department and community, government officials threatened his life, and he fled to the U.S. with his family to escape retaliation. Now, police officials in his native country want him extradited so they can continue to persecute him and his family. ICE knows that the extradition request associated with Jacob is often used by governments to trap people, yet ICE still decided to tear Jacob away from his family, throw him behind bars and deny him bail. That is unacceptable. An immigration judge denied Jacob’s asylum application but his attorney is fighting hard to appeal his case. ICE can and should release Jacob while his appeal moves forward in court. Speak out now to demand ICE free him now.

Jacob entered detention as a healthy person who primarily ate a vegetarian diet. Now for the first time in his life his blood pressure is spiking. The poor quality of food and the stress of detention are causing his health to decline rapidly. What’s worse, detention officials gave Jacob pills after his blood pressure tested consistently high, but refused to tell Jacob what they were or let him see a doctor. Jacob justifiably refused to take the pills without the advice of a doctor and a proper prescription. Inadequate medical care in detention is systemic but for Black migrants like Jacob, racism in healthcare, including practices rooted in the racist trope that Black people don’t feel pain or need medical care, have caused extreme cases of medical negligence that have led to the sterilization and even deaths of Black migrants.2 Detention can be deadly for Black migrants like Jacob. If left untreated, his high blood pressure can lead to heart attack, stroke and even death. We need to free Jacob so he can get proper medical attention before it’s too late.

In addition, Jacob has been in detention for months without access to a hair comb suitable for his hair texture. When his wife sent him a comb, detention officials immediately confiscated it. Denying Jacob basic hygiene is one way to strip him of his dignity and humanity — it’s a racist practice rooted in anti-Blackness that institutions have historically used to control and abuse Black people.

Jacob is a father, husband and an incredibly brave person who should be rewarded for blowing the whistle on police corruption, not treated like a criminal.

We know that freeing Jacob is going to be an uphill battle but, at RAICES we don’t back down just because things are difficult. We protect whistleblowers and believe that every asylum seeker deserves legal representation and due process. ICE has the power to release Jacob, and we have the power to make sure it does. Together, we freed Ubaldo and Yacouba from detention. Now we need to use our voices to free Jacob and reunite him with his family. Add your name now.