Mr. F is a Muslim man who came to the U.S. seeking asylum with his wife and two children.

Currently detained at an ICE prison in Laredo, TX, he is sick and in need of critical medical attention while his wife gave birth to their third child this month. This family — separated by the ICE detention-deportation machine for over 6 months — must be reunited NOW.

Mr. F’s family left their home country due to criminalization and persecution based on their religion, Islam. They spent weeks detained together in a family immigration prison in Karnes City, Texas.

ICE weaponized the persecution Mr. F. faced at the hands of the Tajik and Russian governments to justify his ongoing detention and to separate him from his family. The coded language of “national security” used to demonize Muslims in the U.S. is too familiar to be overlooked: systemic Islamophobia is the reason ICE continues to imprison Mr. F. 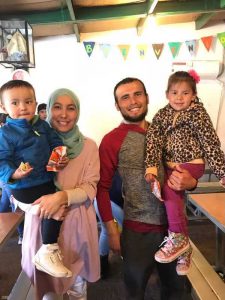 “Anna,” her husband “Mr F” and their children

Over the past 6 months, as COVID-19 ravages prisons and jails across the U.S. [1], Mr. F became one of the hundreds of incarcerated people who have contracted COVID-19 and had to suffer and recover alone in inhumane prison conditions. Despite repeated attempts to access care, he has received limited medical attention while his condition worsens.

On the other side of the bars, Mr. F’s wife recently gave birth to their third child. She and their 3 and 5 year old children are currently staying at a church in San Antonio, and the pastor there is ready to receive Mr. F so that the family can be reunited during the continued pendency of their immigration cases.

Join MPower Change, RAICES Texas, SAALT, and more to let ICE know we won’t allow them to detain Mr. F (or anyone) in dangerous, punitive conditions, and punish them for being Muslim and seeking asylum.