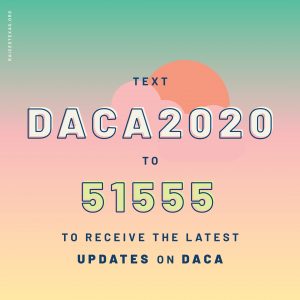 What is the latest on DACA?

RAICES is committed to help keep you updated. Here are some notable updates:

Note: Be aware that litigation on DACA has not ended and may continue for the foreseeable future. If you have questions about filing for DACA, Advance parole or related issues, be sure to contact an attorney right away.

What was the latest decision?

What does this mean for DACA right now?

This means that DACA remains as is for now. Those currently with DACA status can continue renewing while new applicants can only file their first application without receiving a decision. Advance Parole applications can still be filed.

What else did the Appeals Court say?

The Appeals Court reviewed the history of DACA and related court cases. It recognized that several states of the United States want to end DACA in its entirety, with a plan to phase it out within two years.

The notice and comment requirements demand that the government publish any proposed legislative changes, allow for the public to make comments on the changes, and that the government should respond to the public comments. Both the District Court and the Appeals Court found that the Obama administration did not follow the notice and comment requirements. Both Courts also stated that DACA was allowed to remain for now because over 800,000 individuals are benefitting from the ability to have deferred action, work permit, and other benefits.

Deferred Action for Childhood Arrivals is an immigration benefit that was created in 2012 under the Obama administration after a major push from the immigrant youth movement. Although it does not create lawful status, it does provide certain benefits, including obtaining a work permit, access to obtaining a social security card and driver’s license, among other things. DACA can be renewed as long as a person continues to be eligible.

Who qualifies to apply for DACA?

Although the general requirements are listed below, it is important to understand which may apply to you. If you have never been granted or approved for DACA status before, you would be filing an Initial DACA application. If you have had DACA before, even if it was cancelled, denied or it lapsed, you would be seeking a DACA renewal. Initial DACA applications. Per USCIS, one may request initial consideration if:  For initial applications, the following information is also needed:

Renewal applications Once DACA is granted, DACA holders, to renew, have to show: For the renewal application, only an update of addresses lived in since the last application is needed. If there are any new criminal issues, that may also need to be updated.

What happens after I apply for DACA?

For those with DACA already, you should still renew your DACA application within the 120-150 day expiration window to continue your DACA status and avoid a lapse in status, which can affect your Driver’s license as well in most states.

In both situations, once an application has been submitted, USCIS sends a receipt notice as proof of receiving the application. Soon after, a biometrics appointment notice is sent for fingerprints to conduct a background check. This step may be delayed for Initial applications. After that, it is time to wait for a decision. Approval notices can be received in weeks or in months. Because of COVID-19, there may be significant delays.

What kind of documents can I use to prove I qualify for DACA initially?

Proof of identity
Proof of arrival before 16th birthday
Proof of immigration status
Proof of presence in US on June 15,2012
Proof of continuous residence in the U.S. since June 15, 2007
Proof of education requirement
Proof of Honorable Discharge (if applicable)
Fees & Photos

Note: Proof of continual residence should be done at 3 month increments or less, to show you have continually lived in the U.S.

When can I send in my application?

It depends. If you already have DACA, you can renew at this time. It would be wise to consider renewing your DACA application in case USCIS decides to stop taking applications at any point. We recommend submission of your DACA renewal application between 120-150 prior to expiration. For those that may be looking to apply for the first time, USCIS is now accepting applications. We encourage anyone looking to apply for the first time to speak with an attorney and get started right away.

Where do I send my DACA application?

U.S. Citizenship and Immigration Services (“USCIS”) is the department of the U.S. government that receives immigration applications. The address of where you send it depends on where you live. We recommend that before you send in any applications, you make a full copy of your application and mail it to USCIS with tracking information. Check here to confirm what address to send the application to:  https://www.uscis.gov/i-821d-addresses

What is advance parole, should I apply for it and should I travel?

Are there risks to applying for DACA?

It is important to understand the benefits and risks of applying for DACA, especially the first time. This is something you will have to consider before you submit your application. There is no way for anyone to guarantee any results when submitting an application with USCIS. The benefits to obtaining DACA are great, especially when a person does not qualify for other immigration benefits. At the same time, one risk in applying is that USCIS will have your latest information, including where you live. Also, if USCIS decides to reject your application, they could keep the $495.00 fee sent in. Another risk is that USCIS could use your information to place you in removal proceedings if you have criminal history, for example.

What should one do if placed in removal proceedings?

When a person is placed in removal proceedings, that means the U.S. government is actively trying to remove that person from the U.S. For anyone in removal proceedings, it is strongly recommended to speak to an attorney to understand what options are available. It is important to understand if you qualify for any defenses in Immigration Court, deadlines and next steps. One common defense, for example, is Cancellation of Removal for Certain non-permanent residents. Consult an attorney if you need further guidance. Others that are married to U.S. citizens may have additional options.

What is RAICES doing to help?

Yes! RAICES is committed to helping you understand what resources are available for you. We are providing free consultations, free legal representation to those that need help renewing DACA, and financial assistance to cover your DACA application fees for as long as funds are available.

Do I have any rights if I don’t have DACA?

It is very important to know your rights. Regardless of your legal status, you have the same constitutional rights as everyone else in the U.S. This includes:

What should I do?

If you have questions about your legal options, speak to an attorney so you can get personalized information. Although general information is very informative, details matter in immigration law Second, it is important to get involved. Text DACAinfo to 51555 to receive action alerts. Third, take care of yourself and your family. Here are some additional resources (en español) to help you.

You might be eligible for financial support with your application fees

RAICES Statement on the Dream and Promise Act

These bills continues to be symbolic. Our statement on the Dream and Promise Act.